There are really a lot of reasons people can suffer from acid reflux. In this post, we’ll dive into what causes acid reflux in women, because there can be some differences that women can experience and reasons why men won’t.

Acid reflux, also known as GERD or heartburn, is when regurgitation of gastric contents flow into the esophagus and oral cavity from too much or not enough acid, being produced in the stomach.

If you’re suffering from acid reflux more than once a week, you’ll want to consider a cure for GERD and not just covering it up with antacid pills each time it shows up.

Symptoms Of Acid Reflux In Women

Studies tend to show, women have a higher frequency of heartburn and slightly more severe symptoms. With that said, men are more likely to have Barrett’s esophagus, than women.

Women, on the other hand, were more likely to suffer from what’s known as a hiatal hernia, where the stomach pokes upward through a hole in the diaphragm. This can be attributed to heartburn.

Women were also more likely to be obese than their male counterparts when it came to having reflux surgery.

One study showed that when it comes to nocturnal symptoms, regurgitation, and heartburn, which had been analyzed by endoscopy, women scored significantly higher than did men. Women have also reported higher symptom scores when it comes to the lower portion of the stomach, which includes but is not limited to, abdominal pain, as well as constipation and/or diarrhea.

This would suggest that gender differences might exist when it comes to acid reflux. Estrogen, as well, is showing signs of playing a role as an anti-inflammatory agent.

There are only a few studies that focus on the differences between acid reflux in women and men.  More study’s, for sure, need to be done.

Causes Of Acid Reflux In Women

Here is a list of some common and not so common causes of acid reflux that women may experience.

Women may experience anything from mild to major heartburn during pregnancy. It can also be different with the same mom and separate pregnancies.

In other words, you may have no signs of heartburn or acid reflux with your first pregnancy but then when your second comes along, you could suffer for the full 9 months.

If this is the case, you’ll really want to watch what you eat. A plant-based, grilled chicken type diet is best to follow. I wrote another post showing a diet plan to follow if you suffer from acid reflux. You can find it here.

Women and Heartburn, A Conclusion

When it comes to reflux symptoms, it affects women more than men. However, men will endure more changes, more frequently.

It is likely that estrogen plays a role in anti-inflammatory action.

Women are more likely to experience heartburn, belching, and regurgitation than men. This could imply that sex and gender play a role in the way symptoms are signaled in our nervous system.

Causes of acid reflux in women, for the most part, are in line with men. Yet, there are still some defining differences. As more studies are attempted, we may finally come to some hard evidence of specific characteristics as well as treatments, for both men and women.

READ MORE
The #1 and Only Way To Cure Acid Reflux! 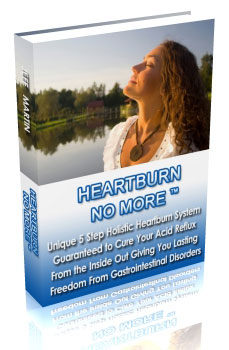 Read More
We are a participant in the Amazon Services LLC Associates Program (and other potential affiliate networks), an affiliate advertising program designed to provide a means for us to earn fees by linking to Amazon.com and affiliated sites.